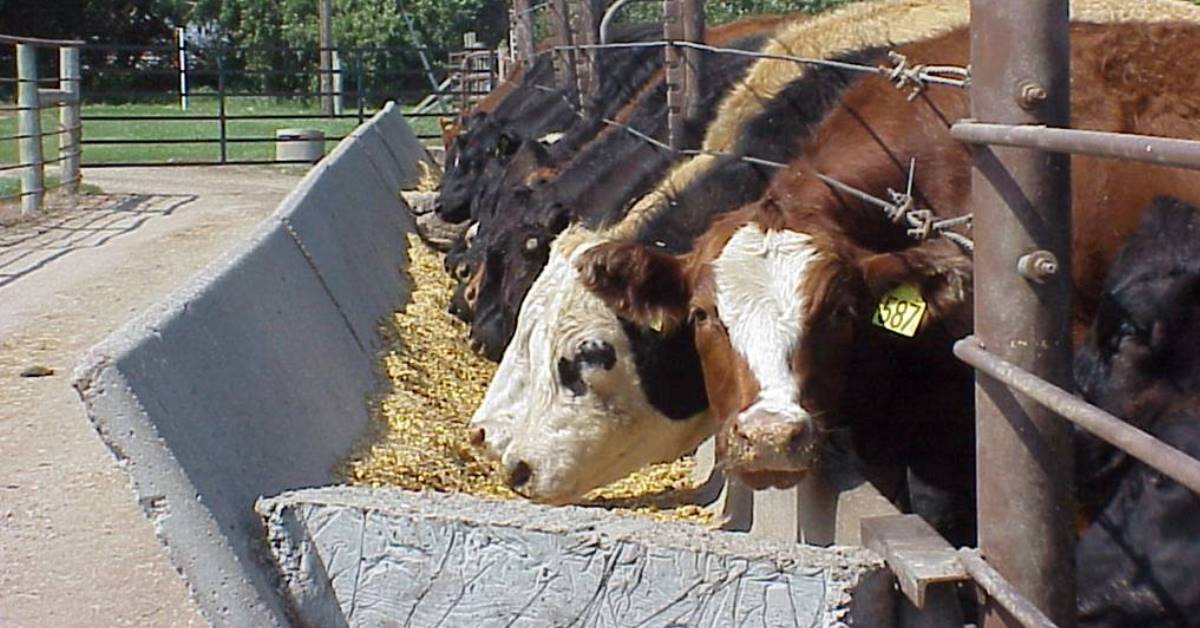 Since the advent of the ethanol boom in the upper Midwest, distillers grains (also known simply as distillers) have become a staple ingredient in cattle rations. Known to enhance both ration palatability and animal performance, distillers are a natural fit for all classes of cattle, from feedlot to cow/calf production. Low global oil prices, tight grain supplies and decreased fuel demand can cut the profit potential of fuel ethanol production. The resulting market pressure could force some ethanol plants to close, at least temporarily, interrupting the supply of ethanol coproducts and mandating a quick move to feeding cattle without distillers grains.

Feeding rations with distillers has made managing bunks easier and has reduced digestive upsets. The moisture from wet or modified distillers conditions the ration, acting like a glue to minimize dust and sorting. Palatability and consumption are also improved compared to drier diets. Additionally, distillers energy comes in the form of fiber and corn oil, which displaces dietary starch from corn and reduces incidences of acidosis and “rollercoaster” intakes.

When transitioning cattle to diets without distillers grains, the rations usually become drier. It is important to reduce load amounts to provide the same amount of dry matter (DM) delivery to the bunk. If loads are not adjusted and the same amount of a drier ration is fed, the cattle will likely consume everything in the bunk, just as they are accustomed to doing — leading to a big jump in DM intake. This spike in consumption now involves a higher concentration of dietary starch, increasing acidosis risk. Grain type will also influence the rate of ruminal acid production. For example, cereal grains and high moisture corn are fermented more rapidly than dry corn and as such pose a greater risk for digestive upset.

Distillers can serve as a source of both protein and energy in cattle diets. Their most economical use, however, is in meeting dietary protein needs. Distillers’ price helps us economically reach higher protein levels, but when fed above the protein requirement, they are used as an expensive corn substitute. Rations with distillers grains typically contain higher net energy (NEg) than traditional corn-based rations. The higher oil content in distillers relative to corn gives them a boost in NEg. When shifting from a ration including distillers grains to a traditional ration, reaching the same level of protein and energy will be more difficult, especially in finishing rations.

Before the expansion of the ethanol industry, feedlot rations typically included alfalfa hay. Alfalfa was plentiful in the Midwest, and when it was included with a 40% protein supplement, traditional corn-based rations would yield 12% protein. The proliferation of ethanol plants meant alfalfa acres were soon shifted to corn production to meet the demands of the growing boom. Coincidentally, with 30% protein distillers becoming available, alfalfa was replaced with lower-protein straw or corn stalks as a roughage source.

Whether a decline in the availability of distillers is short- or long-term, the first step is to account for a reduction in dietary protein. Now that alfalfa is no longer readily available, considering alternative ingredients and how they fit into rations is necessary.

Keeping sufficient protein in the ration is imperative to maintaining performance. Protein serves two primary roles that directly contribute to daily gain. First and foremost, ruminal bacteria require nitrogen from protein to grow and function, allowing them to liberate energy from fiber and grain for the animal to use. Secondly, protein flowing from the rumen to the small intestine is absorbed and goes directly to supporting lean muscle accretion and frame development. Cattle that are protein-deficient will eat to satiety but will be limited in their ability to digest, absorb and utilize nutrients. Lean muscle growth is impaired and feed conversion is reduced. Neglecting to supplement protein can mean a small drop in the feed bill — but a large decrease in the amount of meat produced.

Hubbard offers Express Grower and Finisher supplements from 40–50% protein, along with Gainrite 40:30 Gluten Finisher. These pelleted products, fed at 1- 1.25 pounds, provide the needed protein boost when distillers inclusion is reduced. Express Grower 2.0 40:10 and Express Finisher 2.0 50:30 are new supplement options that meet the challenges of balancing a 12% protein traditional ration without the benefit of alfalfa. These 2-pound-per-day supplements use non-protein nitrogen to support the growth of ruminal bacteria in the most cost-effective manner. Additionally, the supplements meet the needs of supplemental protein without over-feeding vitamins and minerals, as would occur when using a 1-pound supplement at a higher inclusion rate. Also new is the Beef Pack Pro 50:30, a protein supplement that has no other fortification than protein. This supplement can be fed at various intakes but should not exceed normal limits of NPN for growing and finishing rations.

Many beef producers and feedlot nutritionists who entered the cattle industry within the last fifteen years cannot remember a time when distillers were not available. While distillers represent a nutritional and economic asset to cattle feeding, they are not a requirement. We can finish cattle without distillers, but we should plan for what could be coming in the future, transition cattle carefully when making ration changes and fine-tune our bunk-management skills. Planning ahead means, first, checking the status of your local ethanol plant to anticipate impending closures and, next, developing a plan to meet cattle protein needs. Being prepared is the key to a successful transition when feeding without distillers grains.