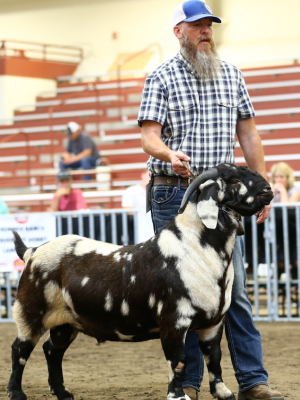 "We are always striving to improve our reproductive rates in our herd. We use a heavy amount of AI and embryo transfer technology in our program, so take-rate and overall reproductive quality in our herd are paramount. Live kids on the ground are our measure of success, and this makes nutrition a key factor in all the phases of our reproductive program.

We have been feeding Blueprint® exclusively for 12 months. Our percentage of live kids from the recipients has increased.

Our embryo harvest rates, and the overall quality of the embryos and their viability, has dramatically changed. In our recipient herd of females, our embryo take-rates went from 11 out of 20 to 19 out of 20. The health and vigor of the recipients, donors and the offspring have also maintained or improved with Blueprint®.

The improvement that we have seen in live kids on the ground this year has been incredible." 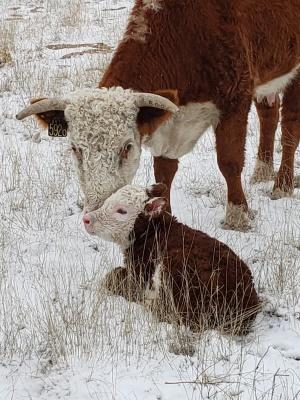 “We started feeding the Blueprint 6% Phos low-moisture blocks (LMB) about two and a half years ago and have seen our conception rate go from 94% to about 96%. Our calving interval has tightened up, and the calves are more vigorous at birth. We have also observed improved fertility tests and increased scrotal circumference in the yearling bulls and improved semen quality in the mature bulls standing at stud.” 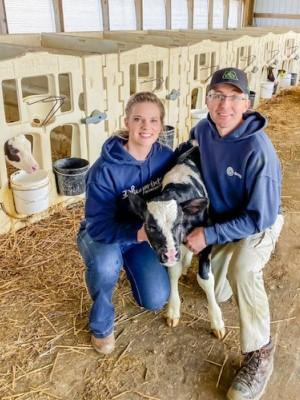 “We were struggling a lot with losing calves to scours. We wanted to lessen the severity of our scours and have fewer impacted days. When we started on the Blueprint® Milk Replacer, there was a noticeable difference in our calves instantly. The product was easy to mix, and the calves seem to really like the taste of it.” 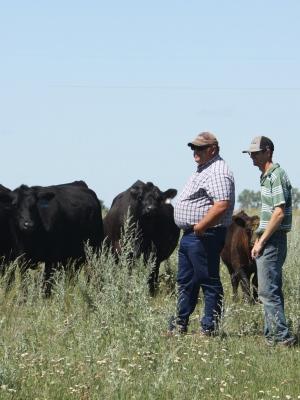 Dustin began using Blueprint Cattle and Calving Mineral with Bio-Mos® both prior to and during calving season, after many years of using a “premier breeder mineral.” Shortly thereafter, he noticed an improvement in the vigor and health of his calves during calving. The benefits carried into the summer season, when Dustin noticed decreased incidences of foot rot and lameness in his cows and calves. After seeing these results, the Frey’s implemented year-round use of Blueprint products and placed their bulls and replacement heifers on Blueprint as well. Since making this change in their replacement heifer nutrition program, they have had only three open heifers out of 117, which translates to a 97.5% pregnancy rate on two rounds of AI and one cycle with pasture sires. In addition, the mature cows had a 96% pregnancy rate on a 60-day breeding season with one round of AI. Since implementing the Blueprint nutrition program, more of the Freys’ bulls are passing their first breeding soundness exams, often at less than 12 months of age, and the Frey’s have seen fewer incidents of reproductive tract infections or sub-fertile bulls. 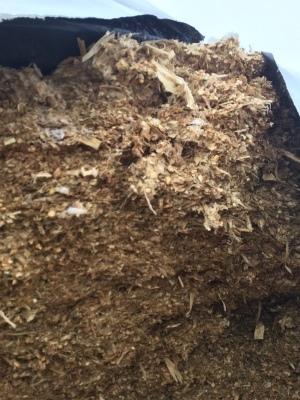 “We had applied BulletProof® to some of our millet hay back in 2018 that was baled at 23% moisture. My neighbor jokingly asked if I was going to disc around the bales so that when they started burning, they wouldn’t start a prairie fire. Today, the bales have some greenness and no sign of mold. It has stored well, and the cows are still eating it. I also used Bulletproof on our silage and we haven’t had any spoilage throughout the pile.

I will not put silage up without using Bulletproof and will utilize it on hay when needed.” 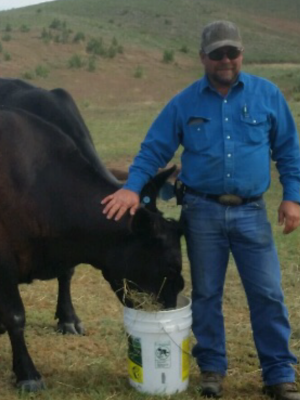 “We have been buying our mineral from Hubbard Feeds for years, but last December our sales representative suggested we use Blueprint® West 8 through the winter into breeding season. The Blueprint technology and potential was interesting, and the price was also very comparable, so we gave it a try. We saw good health on the cattle, but what really sold us on the Blueprint program was the fact that we had a 100% pregnancy rate in a 52-day bull turn out.”

“Early last fall, our Hubbard Feeds representative stopped by the ranch to give us a heads up on the new Blueprint® mineral program. We were very interested in the technology and research behind Blueprint.  We discussed the program with ranch owner Tony Marletto and we decided to feed Blueprint 8 West to our heifer calves and first-calf heifers. The results from the heifers on Blueprint were the best we have ever had. On the 63 head of heifer calves we had a pregnancy rate of 100% and on our 79 first-calf heifers we only had one open. This was much better than the competitor’s high-end chelated mineral we continued to feed our mature cow herd, which only had a pregnancy rate of 89%. We are definitely going to continue on the Blueprint program.” 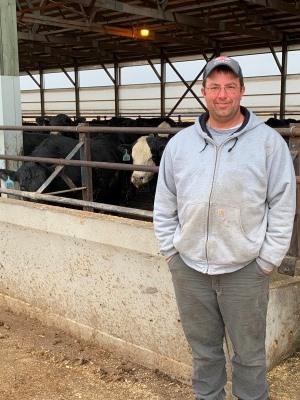 "After testing our feed quality using Alltech’s 37+ test, and having a group sell 100 pounds lighter than originally predicted we knew there needed to be a change in how we feed our cattle.

Our cattle consistently had low intakes except for the group fed Hubbard Feed’s Stressguard. Those cattle had high intakes along with better gains. We started to incorporate in a couple of more pens and were seeing even more positive results.  Now all of our cattle on feed have Integral A+ incorporated into their rations." 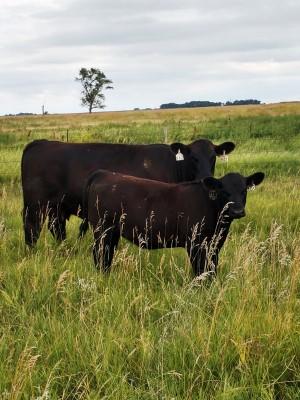 “I decided I wanted to step-up the nutrition on my cows, so in the spring of 2018, I switched to the Blueprint® program with Actigen®. I have been very pleased.  We kept the cows on Blueprint with Actigen through summer and over the winter. Since being on that program, we’ve had really good conception rates. This spring, they bred back in time despite the challenging muddy, wet and cold conditions.”

“We used Blueprint with ClariFly® this year on the registered cows and saw no pink eye. I also did the pink eye implant. The calves looked super and they were clean. I went down there one day after a rain and the cows were packed up around the corner because it was humid and there was mud and there were hardly any flies.” 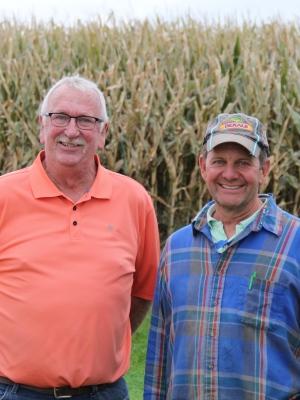 Getting pigs off to a fast start after weaning is important. Jeff Schmitt noticed that after switching to Hubbard’s Powerstart program, his pigs had better bloom and their health and performance is tremendous. “The sow unit I get pigs from switched to Hubbard Feeds a few years ago”, says Jeff.

“ I really liked the way those pigs looked, so I made the change on my farm and have been very happy. I’m feeding Powerstart to my nursery pigs and DesignRite Blueprint to my finishing pigs and the days to market continue to improve.” 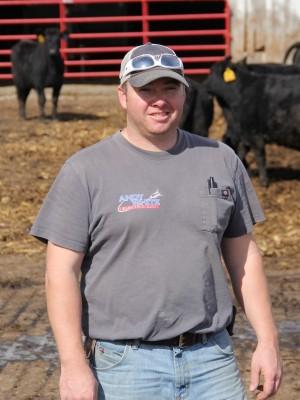 “MY CATTLE STAYED HEALTHY IN A VERY TOUGH FALL.”
Despite having 17.5 inches of rain in 30 days, Andy’s cattle did not back off feed at all. The cattle were weaned on September 7th with an average weight of 451 lbs. He fed 0.5 pounds of StressGuard Starter Pack Plus for 28 days. When Andy weighed his cattle after 32 days on feed they weighed 550 lbs, which equals a 3.1 lb ADG.

“With the StressGuard Starter Plus program the cattle showed no signs of snotty noses and we didn’t have to give any shots!” 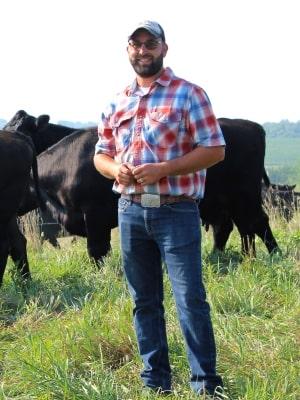 “I have been using both Blueprint® Fescue and Cattle Mineral for over two years. I was dealing with a lot of fescue-related troubles when my Hubbard rep first called on me – lost tails, open cows and bad feet. My rep guaranteed he could fix these problems and he did. I now have two generations with no lost tails or fescue foot and my conception rate has increased. Feeding the mineral is really simple and I like that my rep brings not only product information, but relevant industry knowledge to the table.” 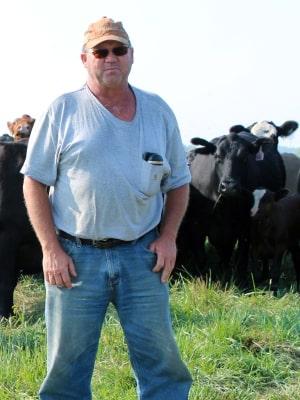 "We currently use Blueprint® Calving Mineral with Bio-Mos® and Blueprint Fescue Mineral with Altosid® IGR on our operation. We started using the calving mineral to combat scours in first and second season calves and scours just seemed to disappear. Despite some wet springs, calves have experienced stronger starts and have a lot more vigor. We then decided to give the fescue mineral a try. Even in the heat of the day, cows will be out eating and our tail loss has really improved. We were also having trouble with wind blowing away our previous mineral because it was too fine, but we don’t experience this issue with Blueprint because it is more coarse and consistent.” 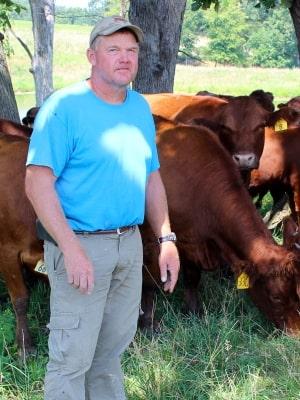 "I have fed both Blueprint® Cattle and Fescue Mineral for several years. I have a better conception rate and have seen a noticeable improvement in haircoat and previous tail and foot issues. I took a break for a bit to try out a cheaper product and noticed a difference in conception rate so I switched back. My Hubbard rep makes things easy to understand and the product works." 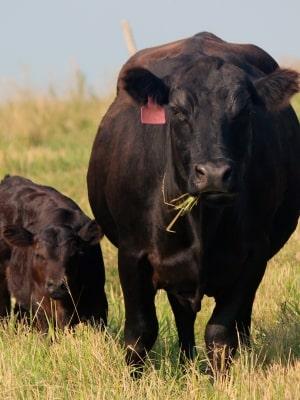 "I like several things about Blueprint® minerals – they’re coarse, superior products that perform well and they offer a good selection with a consumption rate that is right on target for most. Blueprint also incorporates a lot of technology that other products don’t. Fescue is a big issue in my area and since switching most of my customers to Blueprint products, we have seen better conception rates. Plus, the cost difference equates to pennies per day and customers are saving money in the long run by not having to deal with health issues and open cows. I also like Hubbard’s level of service. There are not many companies or representatives out there willing to offer as much assistance and it’s no comparison to those I’ve dealt with in the past." 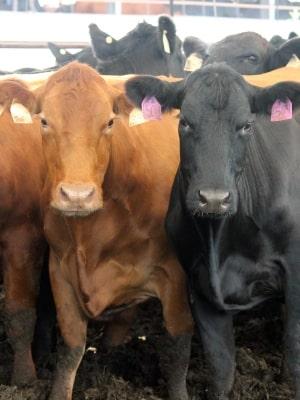 “I feed Blueprint® Fescue Mineral and Blueprint with Bio-Mos®. Since starting my herd on these products, I have experienced no fescue, calving or scours-related issues. When I last AI’d all of my heifers and cows, on first service I had 72 percent bred, and on second service 85 percent were bred, a significant improvement.”