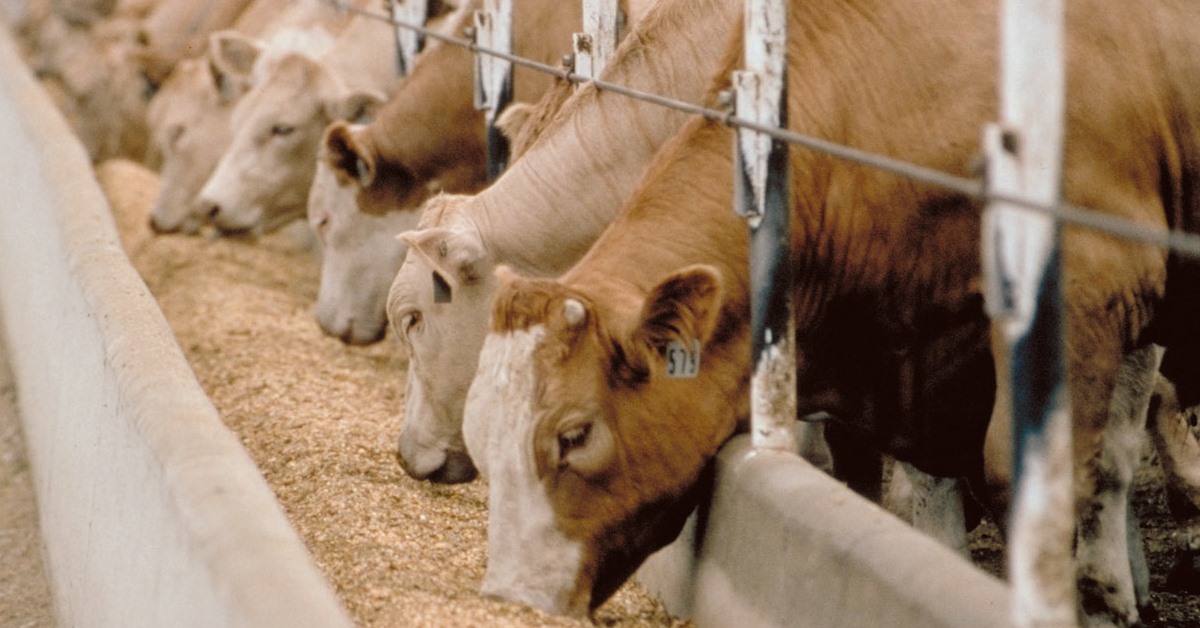 Abscesses can be restricted to the liver itself or, in advanced cases, may be adhered to abdominal organs and diaphragm, resulting in carcass trimming. According to their number and size, liver abscesses are scored 0, A-, A and A+ with respect to increasing severity. The most severe infections, or A+, are associated with reductions in daily gains, feed efficiency, dressing percentage and carcass yield. Cattle with less severe liver infections (A- and A) do not experience reductions in feedlot performance compared to cattle with no liver abscesses (0). Liver condemnation and carcass trim are estimated to account for a decrease in carcass returns of $20 to $80 on a per-head basis. Presently, about 20% of grain-fed feedlot cattle will have liver abscesses; this number has increased over the last two decades. Therefore, the severity and extent of liver infections are the major determining factors related to production and economic losses.

A variety of dietary characteristics are associated with the incidence of liver abscesses in feedlot cattle. Both the type and concentration of forages included in finishing diets will affect the incidence of liver abscesses. In general, finishing diets with short-particle-length forage result in a greater risk of liver abscesses than diets with coarser, more fibrous forage. As such, cattle consuming alfalfa hay or corn silage in their finishing rations are more prone to acidosis than when wheat straw or corn stalks are provided. Increasing the proportion of roughage in a finishing diet to provide 10–12% is also beneficial, along with the greater coarseness and length of forage particles. This is best described as the “scratch factor” and is associated with the health and wellness of the epithelial cells lining the rumen.

Grain processing methods are also related to incidences of liver abscesses. Extensive grain processing, such as fine grinding and steam flaking, reduce the particle size, increase the surface area, and increase the rate and extent of starch digestion in the rumen. This increases the production of ruminal acid and leads to the keratinization of the rumen lining. These cascading events lead to lesions that allow rumen bacteria to enter the abdominal cavity.

Incidences of liver abscesses are greater in steers than in heifers, probably due to the higher feed consumption and acidosis risk for steers. Regarding genetics, finished Holstein steers are associated with a greater probability of liver abscesses than other breeds. This more likely a result of management than genetics, as large-framed Holsteins are fed high-energy diets for longer periods than beef breeds. In recent years, greater numbers of feeder cattle have been coming from dairies. Following these calves through slaughter indicates that liver abscesses can be formed during both the growing and finishing phases. Decreasing the incidence of liver abscesses in dairy-cross calves requires minimizing acidosis and increasing the health of the rumen epithelium. A recent scientific review indicated that the prevalence of liver abscesses is regionally based. The greatest incidence is associated with Kansas, eastern Colorado and western Nebraska, whereas cattle fed in the Midwest and the desert Southwest are at less of a risk.

Liver abscesses have a significant economic impact on the beef industry. Presently, packers will ask cattle feeders to make corrective management decisions when liver condemnation reaches or exceeds an acceptable threshold. The lost revenue from reduced liver sales, lost tonnage due to additional carcass trimming and the slowing of plant processing speeds are major concerns for packers. Economic losses for cattle feeders will usually be restricted to lost animal performance, lighter slaughter weights and extended days on feed. However, cattle feeders selling in-the-meat will have added discounts from increased carcass trim.

Traditionally, cattle feeders use nutritional management and antibiotics to minimize liver abscessation. Tylosin phosphate, a macrolide antibiotic, is approved for cattle diets to reduce the incidence of liver abscesses, and it is estimated that more than 70% of cattle in large commercial feedlots receive tylosin for this purpose. Chlortetracycline is also approved for controlling liver abscesses, but it is not commonly used for this purpose. Public concern continues to grow about feeding antibiotics and their impact on microbial resistance. Scrutiny over the use of medically important antimicrobials in livestock production has led the European Union to ban feeding tylosin. In the United States, its use is now under veterinary oversight with a Veterinary Feed Directive (VFD). A vaccine is available to inhibit Fusobacterium necrophorum, but it has not been widely adapted by the industry.

In closing, liver abscesses are a problem centered around high-starch finishing rations. Abscesses are primarily caused by a cascade of events, beginning with ruminal acidosis, and ending with a bacterial infection in the liver tissue. Dietary forages that provide rumen scratch factor and the proper grain processing are important factors in preventing liver abscesses. Presently, cattle feeders can feed antibiotics to reduce the incidence of liver abscesses, but this may change in the future.