Mycotoxins: Staying ahead of the threat 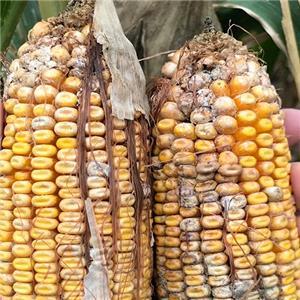 The 2018 corn silage harvest is complete and corn harvest is now in full swing. However, the weather this year has presented some challenges. In many areas of the Midwest, we have had a wet fall and the heavy rains and flooding have caused delays, keeping farmers out of the fields. Leaving corn in the field longer than anticipated causes fluctuations in plant and grain dry matter and presents an opportunity for mycotoxin growth in the field or in storage.

Mycotoxins are toxins that are produced by molds and fungi. They are more common than you might realize, and mycotoxin contamination can begin anywhere in the production cycle where molds may exist, from the crops in the field, to the grain or feed in storage before feeding. Livestock can come into contact with mycotoxins in forages, grains, or other byproducts, but also through complete commercial feeds, pasture, or bedding. More than 500 different mycotoxins have been identified, and they are rarely found alone — that is, if there is contamination by one type, there is likely contamination by multiple mycotoxins — and this can have an even more profound effect on performance and health. The ability to minimize mycotoxins that are present depends upon many factors, including:

Many times, mycotoxins produced by the Aspergillus and Penicillium mold species will develop after harvest when the feedstuff is in storage. Therefore, mycotoxins should be on your radar regardless of the growing conditions throughout the year.

The impact of mycotoxins: More than just a drop in production

Not only do mycotoxins have an impact on milk production, but they can also have a negative impact on dry matter intake, altered nutrient content of the feedstuff, digestive disturbances, or suppressed immunity. However, some mycotoxins have a more profound effect than others (Figure 1). The rumen is not able to break down all mycotoxins, and many can pass through the rumen to be later absorbed in the small intestine. This can be especially dangerous for transition cows that are already at risk for other health and metabolic issues. Performance and health can decline when feed is contaminated by several mycotoxins, as there can be a compounding interaction that results in a cascade of negative effects. 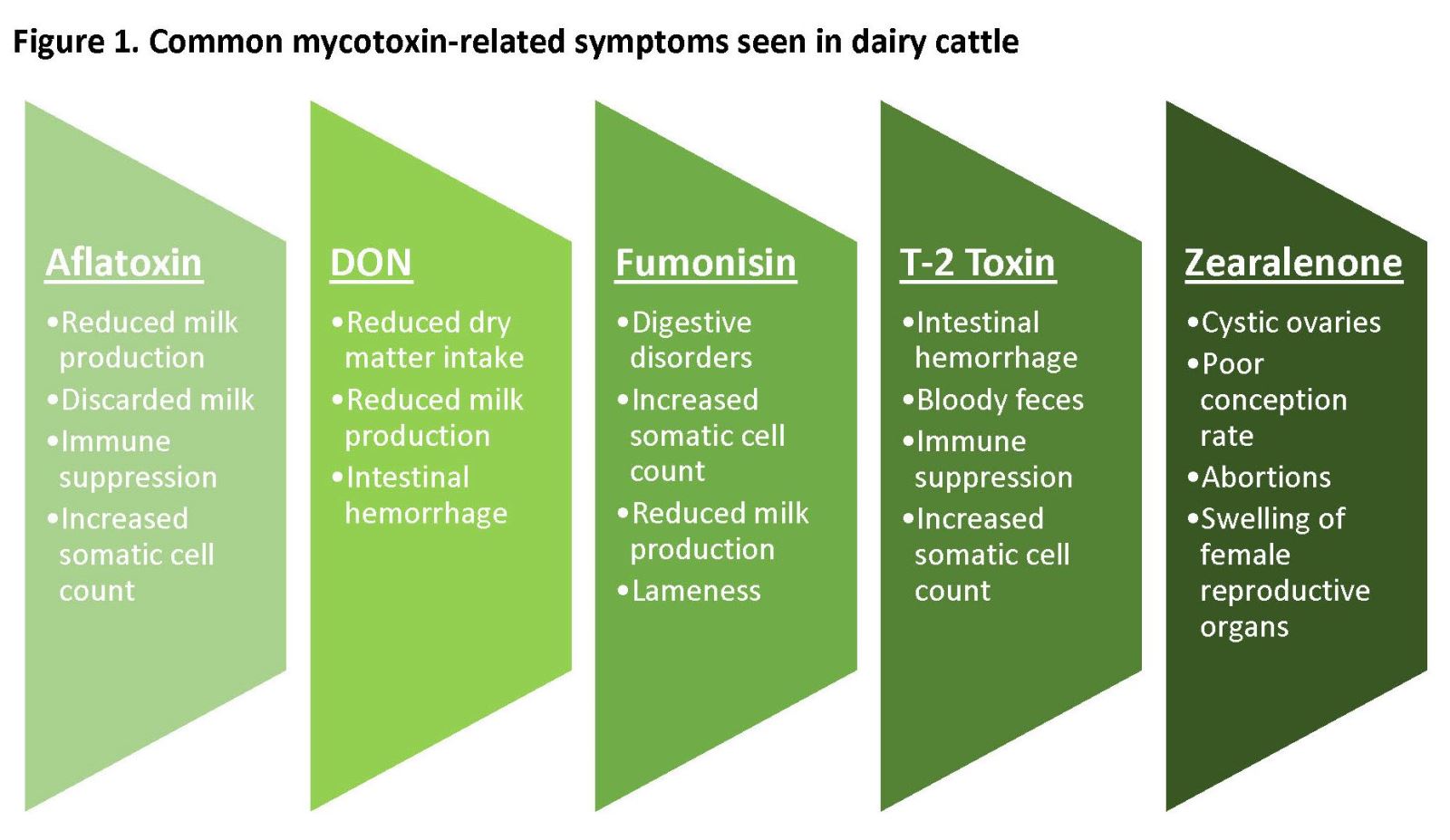 Because mycotoxins can be present in forages as well as concentrates, dairy cattle have an increased risk of exposure to different types of mycotoxins. It is important to test for mycotoxins in silages that are currently being fed, as Penicillium and Aspergillus can begin to flourish during storage and may be visible to the naked eye (Figure 2). Other feedstuffs or TMRs suspected to be contaminated should also be tested. Commercial feed labs can identify a small list of toxins in a feedstuff. For a more thorough analysis, the Alltech 37+® mycotoxin analysis is available to identify grain, forage, or complete feed contamination and the risk level for associated mycotoxins. 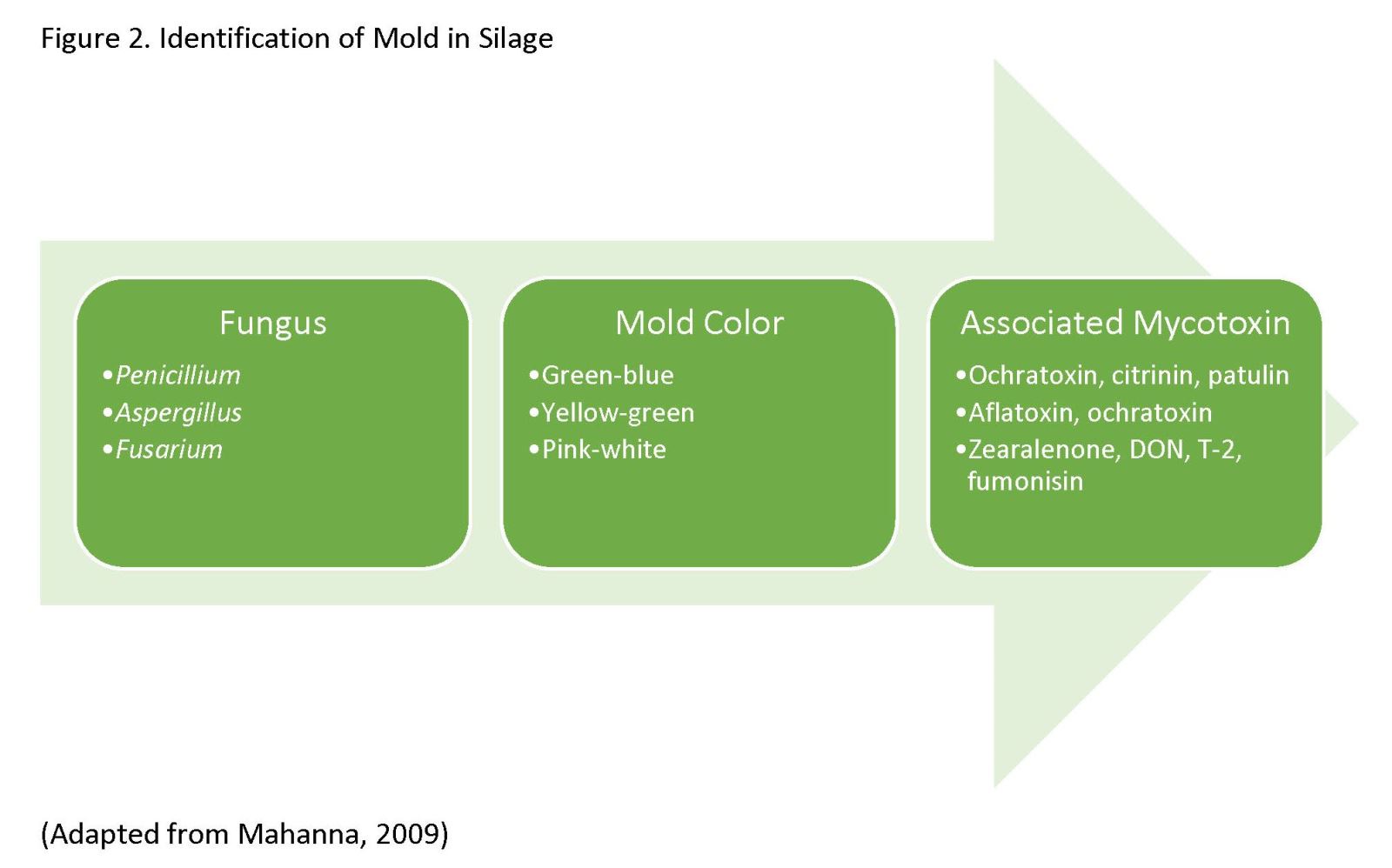 Some mycotoxins will develop after harvest while the feed is in storage, therefore it is important to keep mycotoxin management in mind. Strategies to reduce the risk of mycotoxin contamination after harvest include:

If the presence of mycotoxins is confirmed in feed, a Hubbard Feeds representative can recommend a mitigation strategy. Depending upon the severity of the mycotoxin load, implementing good management practices may alleviate the risk of negative effects. This may include removing and discarding as much of the visibly mold-affected forage or feed as possible so that it cannot be fed. However, due to feed inventory, some mycotoxin-contaminated feed may need to be fed. In this case, the inclusion rate can be decreased in order to decrease the mycotoxin load. Contaminated feedstuffs could also be fed to other livestock groups that are less susceptible to the negative effects of mycotoxins. It is important to keep in mind that young, breeding, and early lactation cattle are highly sensitive to mycotoxins. In cases requiring more intervention than just good management practices— particularly those with a more severe mycotoxin load, or those where more than one feedstuff is affected, a yeast cell wall extract product, clay binder, or a yeast product may be added to the ration. One, or a combination of these products may be required, depending upon the severity of the threat. These products help lessen harmful effects by binding to the mycotoxins to prevent their absorption throughout the digestive process or by maintaining rumen fermentation and immune function.

Mycotoxins are a looming threat present in many feedstuffs. Their negative effects can range from a drop in dry matter intake, to decreased production, or compromised reproduction. Proper testing and identification of mycotoxins, as well as implementing an established mycotoxin mitigation program, is crucial in minimizing these negative effects.

Need Expert Advice? Talk To Us.
Sign Up for our Newsletter