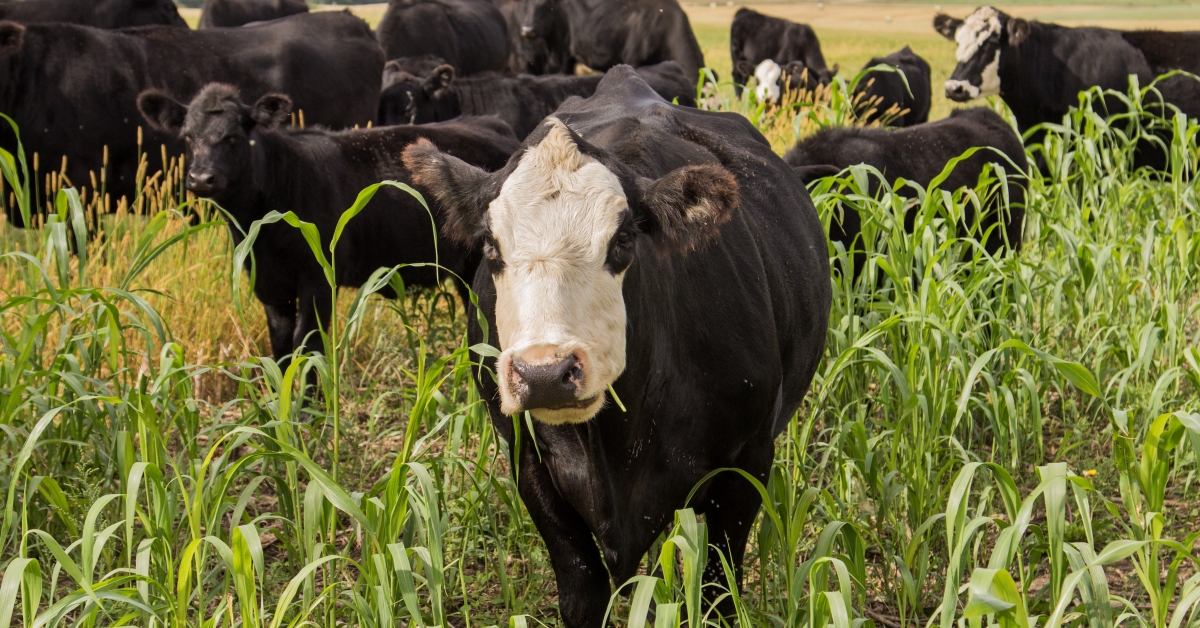 Some occasions bring immediate job satisfaction, like watching a wet calf shake its head and find its first meal. Others hold the promise of future benefit, like when preparing and implementing a plan to meet annual feed needs. While the cost in time and equipment is high, several returns are realized from home-raised feeds. On-hand inventory alleviates the risk of short supplies and protects against seasonal price volatility. Energy and protein production can better match herd requirements to simplify feed use and ration formulation. Additionally, we assume that the effort and care committed to good management — from planting to harvest — will yield the safest, best-quality feed possible…or at least, that is how it is supposed to work. In reality, mother nature holds the key to the outcome. Weather events in the weeks, days and even hours leading up to harvest can trump our best efforts and transform a carefully raised feed resource into a nutritional time bomb.

Elevated feed nitrate and/or prussic acid are unwelcome guests at the ruminant dinner table. While consuming toxic levels of either yield the same unfortunate result, confusion persists among cattle producers as to why these toxins accumulate, as well as how to best manage the situation. While the problems share similarities, the causes do not. Events triggering the accumulation of nitrate or prussic acid differ, as do solutions to lessen the toxicity risk. It could be said that one problem requires prevention and the other intervention.

Plants can synthesize all the proteins required for growth but need balanced measures of sunlight, water and nutrients. Nitrogen is an integral component of proteins and is often in short supply. Therefore, plants have evolved the ability to stockpile nitrogen in times of plenty to draw upon when sunlight, and especially water, are in ample quantities. Nitrogen stores accumulate in the bottom one-third of plant stems, remaining on standby until mobilized to support new leaf and stem formation. Nitrate toxicity is typically associated with drought when plant protein synthesis is restricted, yet nitrogen storage persists, awaiting the opportunity to feed new growth.

Nitrate stored in plants is relatively harmless to livestock. However, after ingestion by cattle, rumen bacteria convert nitrate into nitrite, creating a much more toxic compound. Following absorption into the bloodstream, nitrite binds to red blood cells, basically clogging the sites needed for oxygen transport. Nitrate (or, more appropriately, nitrite) poisoning essentially leads to suffocation, as the animal is starved of oxygen. Once cattle have consumed toxic levels, death often occurs before signs of stress are noticed, and treatment rarely, if ever, arrives in time to be effective.

It is not only during drought but whenever plants are stressed, and growth is limited, that nitrates accumulate. Young plants and volunteer regrowth after harvest can be especially high in nitrates, as nitrogen absorption outpaces vertical growth. While sorghum and sudangrass varieties are often associated with nitrate toxicity, drought also brings an additional risk for other plant species. Small grains, such as oats and millet, as well as stunted corn plants, should be managed with caution. Grazing stressed and/or short plants is not recommended. Baling these plants during drought only results in a crop of high-nitrate hay, as the toxicity remains long-term in the cured forage. Blending this hay with feeds of known low-nitrate content provides a safe approach to diluting the toxin. The best defense against nitrate toxicity is ensiling. The fermentation process rapidly converts nitrate nitrogen into gas, effectively cutting the initial concentration in half by the time preservation is complete.

Prussic acid toxicity is most commonly associated with sorghum and sudangrass hybrids but can also be seen in Johnson grass. These species contain cyanogenic glucosides as a natural part of the plant. This compound poses no threat until exposed to enzymes that convert it into prussic acid. The enzymes function as a switch, transforming the non-toxic glucoside into lethal cyanide. While both the enzymes and glucoside reside in the plant, they are at different locations. It is not until the plant gets damaged and cells ruptured that the active ingredients get mixed.

Environmental factors and stage of maturity can determine if grazing is safe. Frost is the most common injury to plant cells associated with prussic acid poisoning, although cellular damage can also result from trampling, crimping, or plant disease. Freezing plant tissues does not increase the amount of cyanogenic glucoside present. It only allows more prussic acid to form. Young plants possess the greatest concentration of cyanogenic glucoside due to the high leaf-to-stem ratio. Chewing action alone is enough to break cell walls, and enzymes produced by rumen microbes combine with those in plants to accelerate prussic acid formation. With such a high toxicity potential, young plants should not be grazed until reaching a safe height of around thirty inches or more.

Given enough time after plant cells rupture, cyanide gas will volatilize into the surrounding air. The toxin will also dissipate if hay is baled or forage chopped and ensiled. Prussic acid poisoning does not constitute a long-term risk. Waiting ten or more days to graze after a series of light frosts or a killing frost will allow time for the toxin level to drop. However, when plants with either high levels of a cyanogenic glucoside or prussic acid are consumed, the cyanide gas is absorbed across the rumen wall. Once in circulation, the toxin interferes with oxygen use at the cellular level. Cells die by the millions, organ systems fail, and death is imminent.

Similarities between nitrate and prussic acid poisoning often lead to them being confused. The most prevalent likenesses are that sorghum and sudangrass varieties may be involved, and toxicities most commonly occur during fall grazing. While certainly true, several other shared risk factors are centered on plant physiology. The probability of either toxicity occurring correlates with greater amounts of nitrogen fertilizer. Immature short regrowth, and plants that are drought-stressed, injured or wilted, are more prone to harbor a toxin risk. For harvest, ensiling plants is a very effective way to reduce levels of both toxins. Commonalities between nitrate and prussic acid poisonings are also found in animals. Both result in rapid onset of declining health and quick death. Treatments are not readily available or dependable, and affected animals serve as more of a warning sign to producers than a life-saving opportunity. Rumen bacteria act as a conduit to both toxins by transforming a relatively safe plant compound into one that interferes with oxygen metabolism. A final similarity is that feeding grain in the presence of either nitrates or prussic acid will help alleviate some of the risk. For prussic acid, an abundance of carbohydrates in the rumen will inhibit enzymatic activity that creates the toxin, and grain will also support nitrate nitrogen being sequestered in microbial protein rather than absorbed into the bloodstream.

While similarities exist between the two toxin types, there are just as many differences. The location of prussic acid is predominantly in the leaves of plants, whereas the greatest concentration of nitrates is in the lower part of the stem. Episodes of drought cause nitrate accumulation over weeks or months, while prussic acid is suddenly formed in the plant following cellular injury. Nitrates pose a persistent problem and remain in hay long after harvest. In contrast, prussic acid dissipates into the air as the plant dries. A forage testing lab can readily determine nitrate levels. However, the transient nature of prussic acid makes it difficult to measure accurately, as levels will decrease significantly between sample collection and arrival at the lab. Water does not contribute to prussic acid risk, but it can contain nitrates and adds to the problem when combined with high-nitrate feeds. One additional difference worth noting relates to diagnosing the cause of death. While both toxins affect blood oxygen availability, prussic acid poisoning results in bright red blood. In contrast, nitrate toxicity can be confirmed when much darker, brownish-colored blood is observed during necropsy.

While nitrates accumulate with time, prussic acid can become a threat literally overnight. The difference between successful feeding and/or grazing and a toxicity event is understanding the risk level and adapting in the moment. Be flexible in both feed and cattle management. This strategy may involve moving from quickly baling forage to more time-consuming ensiling for nitrate management or pausing a few days before turn-out following a prussic acid-inducing frost. While mother nature may have set the nitrate or prussic acid process in motion, she does not have the last word. Both problems require careful management. When nitrate levels are elevated, think prevention. Reduce nitrates by ensiling, blending forages or taking only the top two-thirds of plants. For prussic acid, intervention in the grazing plan is crucial. The transient nature of this toxin requires applying the brakes on turn-out and allowing time for the poison to dissipate. In either case, hurrying can cost much more than exercising patience and “paying” with time. Managing nitrate and prussic acid toxicity is subject to the same rules as most other things in life: while time is our most limited resource, it can also be our most valuable currency when wisely spent.