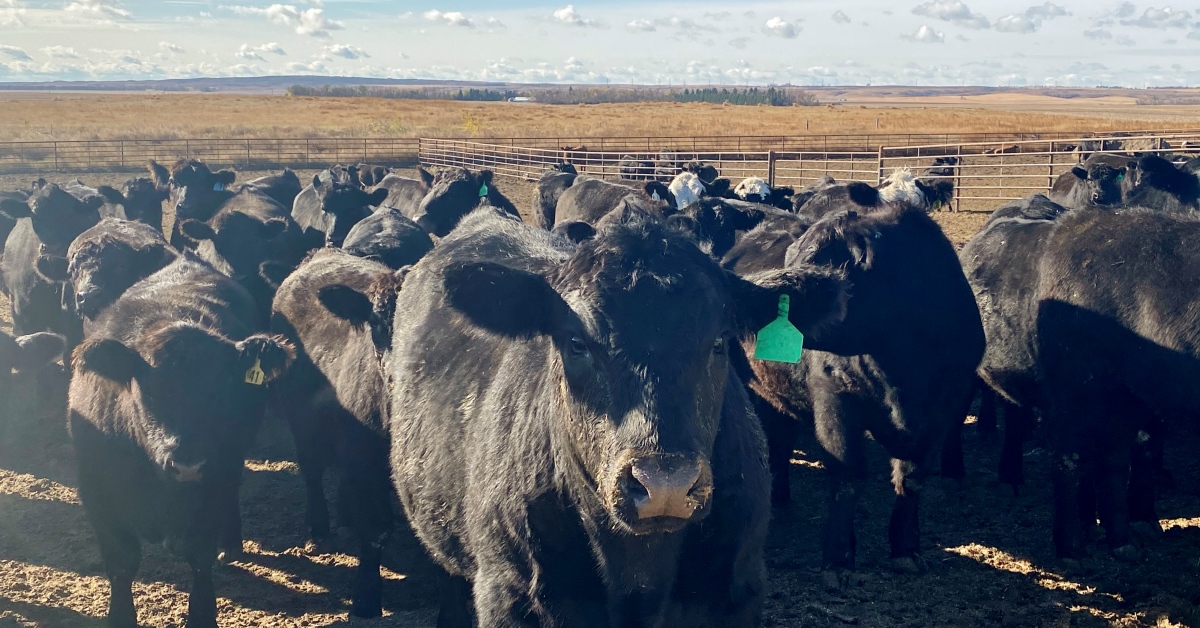 Urea remains one of the most widely used yet mysterious and misunderstood options for beef production. How can we supplement cattle diets with the same product we use to fertilize crops? What about concerns regarding toxicity, and why is urea never fed to non-ruminant animals? Understanding the role and limitations of urea in cattle nutrition is the first step to realizing its benefits. When properly managed, urea remains our most cost-effective means of supplementing protein and provides a competitive advantage beyond the reach of other livestock species.

Feeding ruminants is essentially a two-stage process: rumen bacteria have the first shot at utilizing feed and the animal has the second. Microbes initially ferment easily digestible carbohydrates and break down fiber over time, liberating energy in the form of volatile fatty acids (VFA). The digestion of dietary protein proceeds in a manner similar to energy. Both are reduced to smaller fractions, which are either absorbed across the rumen wall, used to produce rumen microflora or passed through the GI tract to the small intestine.

All proteins are made up of the same small building blocks, or links in the chain, known as amino acids. The same 20+ primary amino acids are used in all life forms, and the amino acid sequence in a protein defines its form and function. Proteins existing in plants cannot be used directly to form muscle in animals or the cell walls of rumen microbes. Feed protein must be broken down to its individual amino acids and short peptide chains, to be subsequently reformed as rumen bacteria or animal tissue.

Just as the host animal has a protein requirement for growth and metabolism, so too do the rumen bacteria. However, while animals require pre-formed proteins and are unable to synthesize “essential amino acids,” rumen bacteria and plants can produce the full array of amino acids using short carbon chains and ammonia. Urea, a form of non-protein nitrogen (NPN), is essentially two ammonia molecules joined together. After urea is cleaved by urease enzymes in the rumen, the free ammonia can be used directly to produce rumen bacterial protein.

Thus, the fate of supplemental urea is the formation of rumen bacterial protein from ammonia. Microbes exist in a state of constant synthesis and turnover and are inevitably flushed to the small intestine in rumen fluid or adhered to feed particles. They provide a steady supply of protein to the animal that is often more digestible and contains a better amino acid content than the original feed consumed.

The optimum dietary balance of NPN to digestible carbohydrates is needed for bacteria to efficiently synthesize amino acids. Upon entering the rumen, urea is quickly hydrolyzed by urease enzymes liberating ammonia. The accumulation of ammonia can outpace energy digestion/availability, resulting in the excess being absorbed through the rumen wall, spilling over into the blood stream. Circulating ammonia is converted back to urea in the liver and is either returned back to the rumen for microbial use or eliminated in urine. The amount of useful urea in a diet is in direct proportion to the volume of rumen-digestible energy available for protein synthesis.

Researchers at Iowa State University (Burroughs, et al., 1975) were among the first to establish how different feeds influence how much urea can be used. This measure was termed the urea fermentation potential (UFP) of the feed. In general, feeds with greater rumen-available energy enable a higher rate and extent of urea utilization than those that are less digestible. This concept remains in practice today. High-energy finishing rations typically contain a maximum of 1.0% of the diet DM as urea (for example, 0.25 pounds urea for 25 pounds DM intake), whereas 50% grain growing diets will reach a maximum urea threshold at half that amount (0.5% of the diet DM). Feeding urea above these levels to reach higher dietary protein will not contribute to bacterial protein synthesis or animal performance; it will simply surpass the threshold for utilization by rumen bacteria. Feeding excess urea can even result in an energy loss as the liver works harder to remove circulating ammonia from the blood stream, potentially leading to toxicity if the liver is overwhelmed. Keeping the proper balance of NPN to rumen-digestible carbohydrates is the key to capturing urea’s economic and performance benefits.

The economics of feeding urea

The cost of urea relative to natural protein sources supports its use when balancing “least-cost” rations. While animals have a requirement for true protein — or, more specifically, amino acids — rumen microbes can grow and function using either natural proteins or NPN. The crude protein system used in ruminant nutrition is based on directly measuring feed nitrogen rather than protein. Additionally, it is assumed that natural proteins average 16% nitrogen. Therefore, once the feed nitrogen content is determined, multiplying it by 6.25 yields the feed’s crude protein percentage. Given that feed-grade urea is 45% nitrogen, this calculation yields 281% crude protein for urea. This number continues to confuse and perplex due to it being above 100%. However, it is more of a relative value than a true percentage and serves to define urea as a source of concentrated nitrogen.

Using soybean meal as a standard, the relative value of urea in cattle diets can be established. Urea costs more per ton if we assume an average annual price of $550 versus $350 for soybean meal. However, after accounting for their relative crude protein contents of 281% and 48%, respectively, the cost associated with urea is just 27% that of soybean meal, although they provide the same dietary crude protein. With protein being among the highest of the purchased feed costs in cattle nutrition, urea offers a clear advantage to ruminants as an alternative protein source.

Research has shown that rumen microbes can subsist on urea nitrogen alone. However, it is widely accepted that feeding natural proteins in combination with urea is the best approach. Targeting no more than a third of the total dietary crude protein from urea will result in increased microbial efficiency and animal performance. It is logical that bacteria are more efficient when using preformed proteins and amino acids rather than having to build them from scratch from carbon chains and ammonia. With this in mind, Hubbard offers our Blueprint line of beef growing and finishing supplements that contain both urea and natural proteins. For example, Blueprint Finisher 50:35 contains 50% crude protein, with 35% coming from urea. This blend of natural proteins and NPN optimizes supplement cost, microbial efficiency and cattle performance more than feeding either source of crude protein alone.

What about urea toxicity?

While urea toxicity is a serious situation, it is a very rare occurrence. Commercial supplements are formulated for specific feeding rates and contain safe amounts of urea. Instances of urea toxicity usually involve errors in management, ration formulation or feed preparation. Two common occurrences leading to urea toxicity are cattle finding free-choice access to a high-urea supplement or when a weighing error results in too much urea supplement being added to a ration. For protein supplements, urea toxicity requires an intake well over what the product was designed for. The Merck Veterinary Manual (Thompson, L.J., 2018) indicates that urea intake can cause adverse effects at 0.3–0.5 g/kg of body weight and that dosages between 1.0–1.5 g/kg of body weight are lethal. Let us use the aforementioned 50:35 protein supplement as an example. This product provides 55 grams of urea at a 1.0-pound daily intake. A 1,000-pound feedlot steer must consume 2.5–4.0 pounds to reach the threshold for adverse effects and 8.25–12.4 pounds before approaching lethal levels. Therefore, urea is a safe and effective protein supplement when managed correctly.

Urea is not a legal source of supplemental protein for other livestock species, as they are unable to use NPN and do not possess the urease enzyme or the capacity to convert ammonia into protein. Ironically, urea may not pose the same toxicity risk to non-ruminants as it does to cattle. Urea presents a minimal risk until it is converted to ammonia in the rumen. A high level of ammonia crossing the rumen wall and entering the blood stream is the actual cause of toxicity, rather than urea directly.

For ruminants, urea can be either a nutritional benefit or a risk, depending on the animal’s age and rumen status. A fully functioning rumen and adequate energy intake are a must. Urea is not an option for pre-ruminating calves or those arriving stressed at the feedlot after a long haul. Additionally, cattle consuming only low-quality forage will lack the adequate rumen-available energy to convert ammonia to protein. In any case, naïve cattle should be started on a low level of urea, and microbes should be given time to adjust. Given the shortage of carbohydrates, providing a full measure of urea too soon will result in excess ammonia production and imbalance.

In conclusion, we often hear the buzz about cattle production being unsustainable while, at the same time, beef and dairy operations continue to provide the much-needed abundance of meat and milk that are consumed worldwide. One must only drive through the western U.S. and view the seemingly limitless untillable land and forage resources to envision the logic and sustainability of cattle production. The primary competitive advantage that ruminants have over other livestock species is their unique ability to use alternative sources of protein and energy, which remain infeasible for their monogastric counterparts. Converting plant fiber, milling byproducts and, of course, urea into choice ribeye steaks and ice cream makes our form of sustainability taste pretty darn good.

Tags
Urea
Need Expert Advice? Talk To Us.
Sign Up for our Blogs

From the Blog
Calf Success: How do our heifers measure up? Comparing University of Minnesota–Waseca heifers to industry benchmarks
Posted Feb 16, 2021
5 steps to balancing your horse’s diet
Posted Feb 10, 2021
Feeding supplemental fat to beef cattle
Posted Feb 02, 2021
Read all news