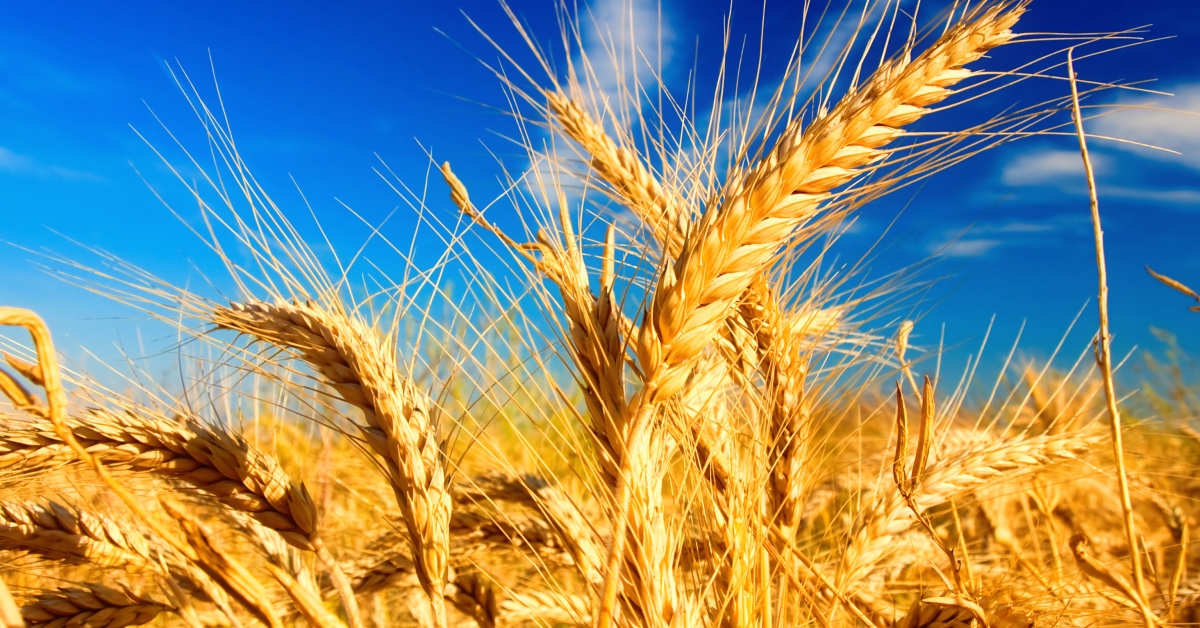 The use of fiber in swine diets has been the focus of significant attention recently. Fiber-rich ingredients can be categorized based on different characteristics, such as their fermentability and viscosity. One of the most widely used methods to characterize fibers is based on their water solubility as soluble or insoluble fibers. It is well-described in the literature that insoluble fibers may be more suitable for the weaned pig. Insoluble fibers are resistant to fermentation, increase fecal bulkiness and, most importantly, accelerate the digesta passage rate, which can potentially decrease pathogen colonization and improve gut health.

Examples of insoluble fiber sources include wheat midds, soy hulls, rice hulls and DDGS. Among those, wheat midds can be a cost-effective ingredient for U.S. swine producers. In addition to their fiber content, wheat midds are also a good source of protein and phosphorus. However, there is a lack of research with this ingredient, especially for weaned pigs. As a result, our team conducted two trials to evaluate the effects of wheat midds on growth performance.

Both trials were conducted at LLRC2 nursery research barn. The first trial utilized 1,750 pigs (that initially weighed 13.2 lbs.) placed in pens with 35 pigs each. There were five treatments with wheat midds at inclusion rates of 0%, 5%, 10%, 15% or 20%. Diets were provided in pellet form and were not balanced for energy; as a result, there was a significant decrease in NE as the inclusion rate of wheat midds increased. Results from the first study showed a linear decrease in ADG as the inclusion rate of wheat midds increased. This response was driven in part by feed intake and in part by feed efficiency. However, the response was surprisingly small considering the very high levels of wheat midds tested in this study. In the subsequent period, when pigs were fed a common corn-soybean meal diet, as well as in the overall nursery period, performance was equal across treatments. 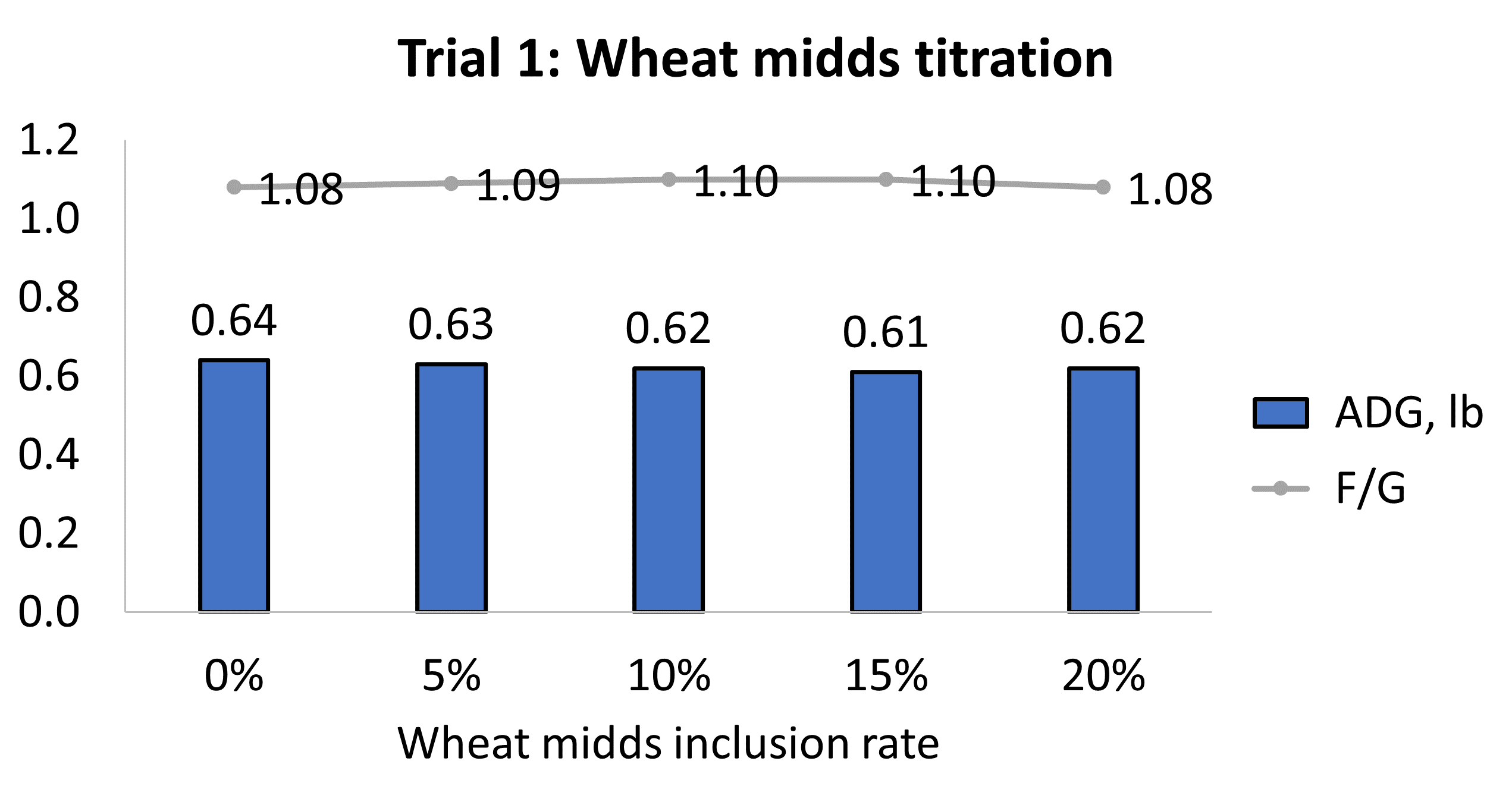 The results from the first study prompted a follow-up trial. Our next question was whether the fact that the diets were pelleted had any influence on the response to wheat midds. To answer that, we utilized 2,520 pigs (initially weighing 12.4 lbs.) placed in pens with 36 pigs each, in a 2 x 2 + 1 factorial with the main effects of wheat midds (0% or 15%) and diet form (pellet or crumble) being studied. An additional treatment was created to evaluate the addition of wheat midds outside of the crumble. The results of this trial showed no evidence of any interactive effects between wheat midds and the diet form. We also did not observe any negative impact of feeding 15% wheat midds, regardless of the diet form. Interestingly, pigs provided the pelleted diets displayed improved performance during early nursery but poorer performance during late nursery when a common corn-soybean meal diet was fed in mash form. It could be hypothesized that the shift from a pellet to a mash diet could impair performance due to the abrupt diet form change or potential changes to gut morphology. 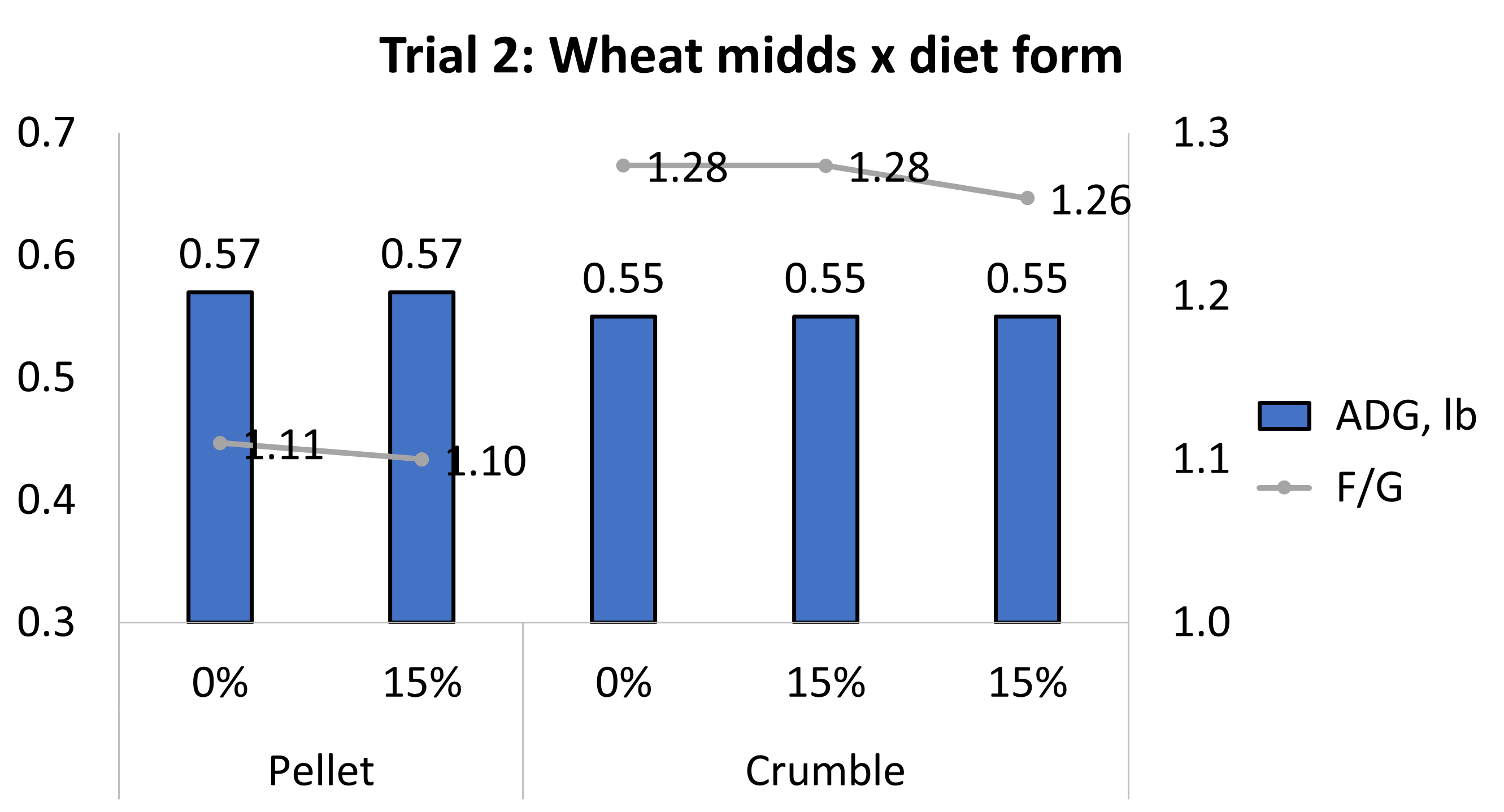 In summary, our research shows minor or no differences in performance, even with very high levels of wheat midds. Therefore, considering its potential benefits to gut health, this ingredient could be a valuable option for swine producers, depending on its availability and price. As with any fiber-rich ingredient, it is especially important to determine the nutrient variability as well as any potential mycotoxin levels before implementing the utilization of wheat midds in the diet.

The complete summary of both trials is listed below.