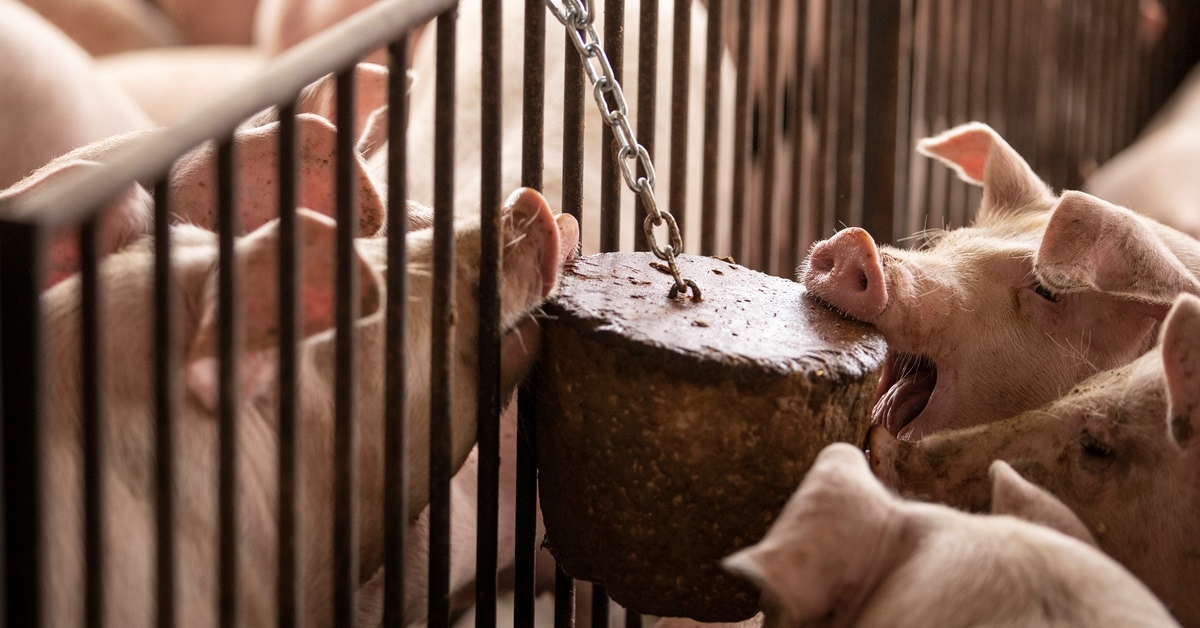 While the pork industry is very good at gathering data on productivity to drive progress, vice behavior is one problem that has proven to be challenging to solve. Vice behavior is a common problem in swine herds and often results in injuries that may decrease productivity during reproduction or decrease growth and, as a result, the value of the animal at harvest. Examples of such behaviors include tail-, flank-, ear- and vulva-biting.

Vice behavior is a multifactorial issue, with factors such as genetics, stocking density, diet/nutritional quality, ventilation, access to enrichment material and stressful events all playing a role in inducing outbreaks. These behaviors are detrimental not only to pig welfare but also for the producer, as physiologically stressed pigs can have a negative economic impact. Stressed pigs are more susceptible to disease, have increased mortality rates, have poor meat quality and experience slower growth.

To devise a solution for this problem, Alltech/Hubbard developed the AllBite™ block. The AllBite block benefits pigs in two ways:

Pigs have a highly inquisitive nature. Modern-day production is generally done in an environment that offers pigs limited opportunities to express this inquisitive behavior, and as a result, they often take their curiosity out on their pen-mates. While this behavior is not always an act of aggression, it can have a negative impact on pig welfare.

Much research has been done exploring what constitutes efficacious enrichment material, particularly in the European Union. A study led by Van De Weerd and Day found that the most effective concentrated materials are investigable, manipulable, chewable (i.e., destructible) and edible. Under those guidelines, the AllBite block is four for four! Hanging the AllBite block at the pigs’ eye-level allows them to investigate the material with their noses and mouths. The AllBite block suspension mechanism, with its connected chains and quick link clips, allows the block to be manipulated by changing the material’s position, appearance and structure. AllBite is a molasses-based block, and pigs can manipulate the material with their mouths. Furthermore, AllBite is edible and is ingested by pigs as they investigate, chew and bite it.

In addition to being an enrichment material for pigs, AllBite also modulates their behavior through the proprietary blend of nutritional ingredients included in the block. One way that production nutritionists often try to combat vice behavior is through the addition of magnesium, which is included in the AllBite block as magnesium oxide. Magnesium is essential to normal mammalian function and acts as a co-factor for many enzymes. It also plays a key role in pathways for immune function.

Several mechanisms have been proposed in terms of explaining the pathophysiology of how magnesium reduces stress, including via the serotoninergic, glutamatergic and adrenergic systems. In a review of 16 studies of magnesium by Bushby et al., at least 10 reported one or more statistically significant beneficial effect of including supplementary magnesium on reducing stress. While just adding magnesium or salt to the feed may be beneficial for reducing vice outbreaks, the AllBite block is a superior delivery mechanism because it can be added at the very first sign of an outbreak — and because it is only used to treat the affected pens.. 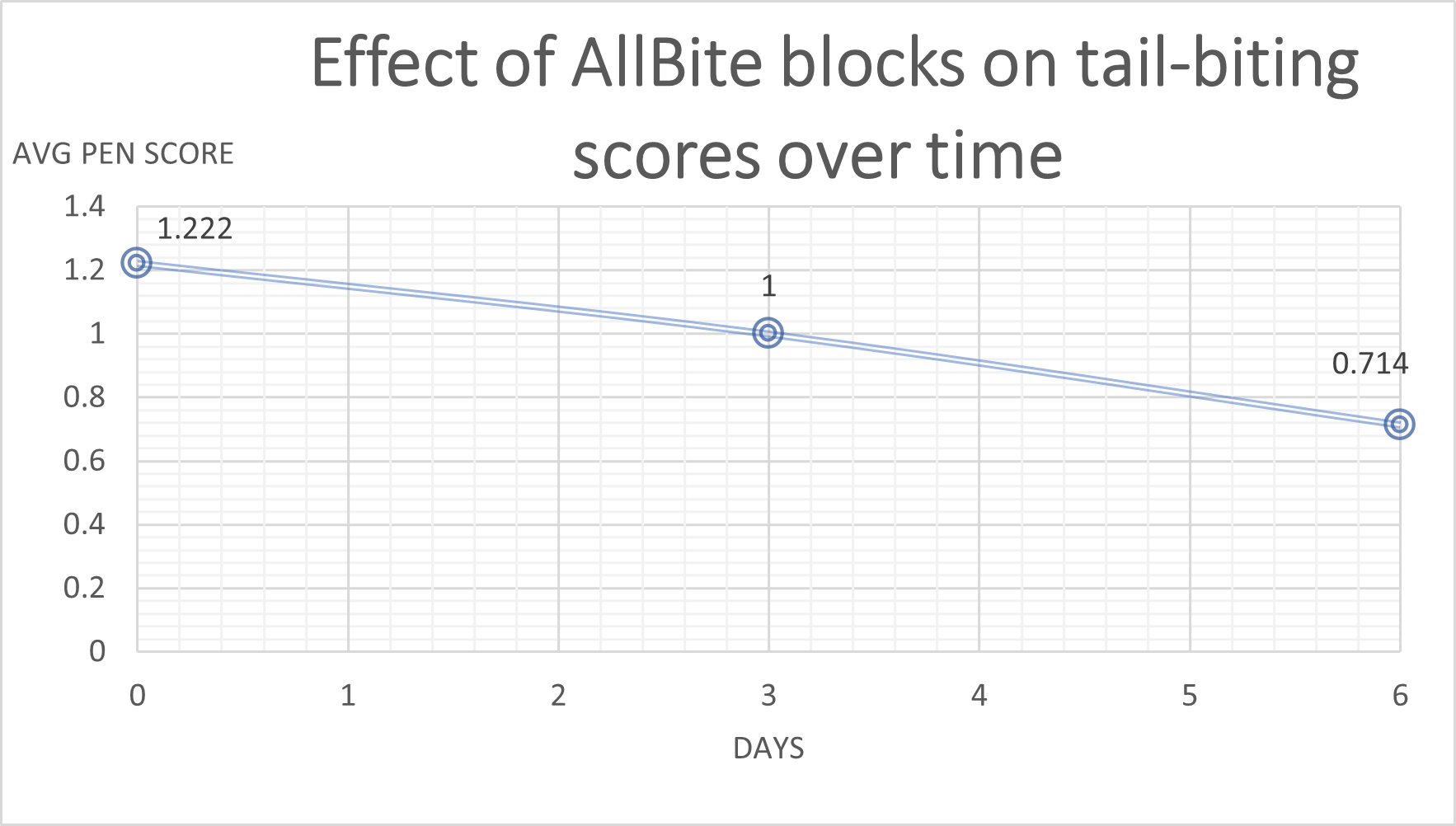 The chart above summarizes the field trial work conducted by Hubbard Feeds that evaluated the effectiveness of AllBite in tail-biting situations. Every pig in each pen was given a tail damage score between zero and four, and those scores were added together by pen to determine the total pen score. Each score indicated various levels of injury, as is outlined below:

2 = Open wounds without signs of infection

This evaluation indicated that the use of AllBite blocks was helpful in reducing tail-biting.

We recommend that one block be provided for every 25 pigs at the first sign of an outbreak of vice behavior or in anticipation of an acute stress event — for instance, the week prior to the top cut being marketed, when pigs are tight on space, or the regrouping of pigs in open gestation housing and the subsequent re-establishment of a dominance hierarchy. AllBite comes in a 23-pound biodegradable container with a chain and clip, which allow for easy hanging of the block from the gate or fence.

Tags
AllBite
Vice Behaviors
Need Expert Advice? Talk To Us.
Sign Up for our Blogs

From the Blog
Liver abscesses: A nagging beef production problem
Posted May 31, 2022
Considerations for split-sex feeding
Posted May 17, 2022
What is heat stress costing you?
Posted May 11, 2022
Read all news