Baleage: Is it the right fit for your operation? 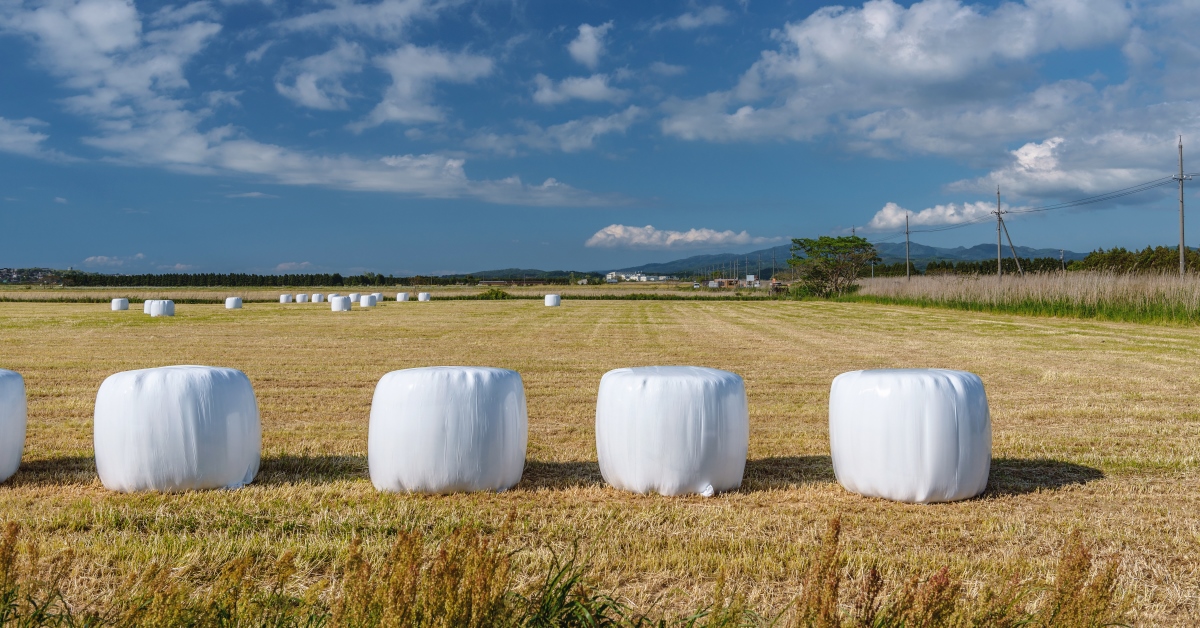 Baleage has become a common term on farms throughout the country, as it is now one of the most popular ways of harvesting and storing feed — but what is baleage? It is the method of cutting green forage into a windrow for baling at a high moisture content to be stored and fermented within plastic wrap. Most producers have considered baleage as a potential forage harvesting system at some point, and many have tried it out.

Weather has a significant influence on making feed on the farm, from planting to harvest. The environment that plants are exposed to throughout the year determines how fast they grow, their nutrient composition and their overall health. Although we can’t control the great outdoors, sometimes we are gifted with great growing conditions only to be challenged with poor harvesting weather, turning what could have been excellent feed into poor feed. Rain frequently delays cutting or settles in on hay that has already been windrowed, giving us very few opportunities to make quality feed for our livestock.

Efforts to make dry hay have faltered due to rain events more frequently in recent years than most of us would like to admit. Excessive rainfall has many producers struggling to get hay dry enough to bale and store properly. Hay baled at more than 20% moisture heats, consuming valuable sugar and protein in the process. Grasses and alfalfa that are cut after a rainfall are high in ash content and take a long time to dry while sitting on already saturated soil. Places of storage pose an additional dry matter loss as well, with bales being rained on and sitting on waterlogged ground, eroding more nutrients if they are not stored inside. Baleage gives us the ability to reduce some of these environmental risks.

Haylage has been a common practice for many years and can also provide some of the same advantages as baleage. Both haylage and baleage are methods of preserving feed through fermentation from high-moisture forage material, allowing producers to remove cut plants from the field quickly. Haylage is typically chopped, packed and stored in a silo, bunker or continuous plastic bag. Baleage is collected using a silage baler for transport to the plastic wrapper for either individual or continuous line storage.

Whether it is dry hay, haylage or baleage, the system that best fits a farm’s needs should be decided upon by considering many different factors and should also be re-evaluated periodically. Custom harvesting operators allow you to jump from dry hay to baleage relatively easily, but many considerations should come into play before committing to a particular system. Below is a summary of advantages and disadvantages to consider.

Once you decide baleage is the right fit for you, determining how to wrap the bales is the next step. The two most common approaches to wrapping bales are inline wrapping or individual wrapping. In some areas, bales are pressed into a continuous stretch tube, but this method is generally less popular. Inline wrapping places bales end to end with a machine that rotates plastic wrap around the bale as you place bales on it, making the row as long as you want it to be. Individual wrapping leaves each bale by itself, wrapped completely with plastic within its own “mini” silo. By wrapping them individually, bales are easier to sell and transport, but plastic costs are higher compared to inline storage. Additionally, the number of bales wrapped per hour individually (20–40 bales) compared to inline (80–120 bales) is much slower. Regardless of end-to-end or individual wrapping, a minimum of six layers of 1-mil. plastic is needed to help prevent air penetration, and eight layers is recommended. Be sure to also check the stretch pressure on the plastic rolls so as not to over-stretch the plastic past 70% of its original width, allowing for more air infiltration.

As with any silage, regardless of where or how it is stored, our goal is to preserve high-quality feed for maximized production from our animals. To do this, we rely on good fermentation for good stability and nutrient retention. Baleage can be less consistent in terms of its moisture levels and packing density, so using an oxygen scavenger like BulletProof® or a high-quality inoculant such as Sil-All® Activate or Biotal Buchneri 500 will optimize fermentation and maximize feed quality. Applying products like these at the time of baling as either a liquid or a dry granular product will help alleviate some of the variations associated with baleage and will provide a higher level of stability when re-exposed to air by combating wild yeasts and molds. Please contact your local Hubbard Feeds representative for questions about baleage or information about our forage products.

Tags
Baleage
Forage
Need Expert Advice? Talk To Us.
Sign Up for our Blogs