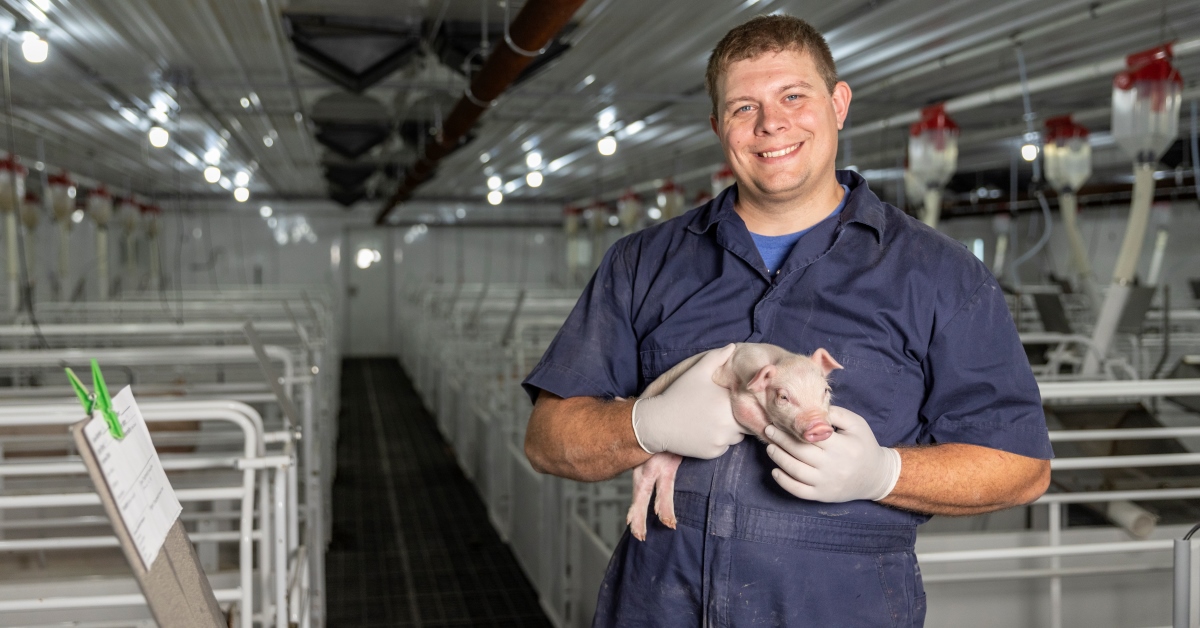 Is your herd positive for Mycoplasma hyopneumoniae (M.hyo)? As a pork producer, it is important to know the answer to this question for pigs in all stages of production. As one of many types of Mycoplasma that can affect pigs, M. hyo is a type of bacteria that lacks a cell wall, which changes the way it behaves and responds to antibiotic treatment. M. hyo has an affinity for the cilia of the trachea, which are hair-like structures that line the windpipe to form the mucociliary elevator, a mechanism that the body uses to remove dust and pathogens from the lungs. If infected, this elevator can be damaged to the extent that it is unable to operate effectively — meaning that the lungs are required to clear the sedimentary deposit on their own, via an increase in white blood cell counts and other inflammatory mechanisms.

As a result, pigs that have experienced an active M. hyo infection are often affected by other secondary infections, such as Pasteurella multocida, Actinobacillus suis or Haemophilus parasuis. A M. hyo infection creates a cranio-ventral consolidation pattern in the lungs — since the front of the lungs are where the air first enters — and the sediment will tend to deposit on the bottom of this tissue. Because the porcine reproductive and respiratory syndrome (PRRS) virus has a natural affinity for the white blood cells of the lungs, this combination also has the potential to concurrently increase viral loads. This combination is known as the porcine respiratory disease complex (PRDC), which can be very frustrating to treat and has been estimated to cost producers around $10 per pig marketed in the face of the disease (Haden, 2012). The cost of M. hyo alone is closer to $0.63 per head, so the additive effect it has when in combination with other infections is clear.

M. hyo has a very slow population doubling time, meaning it takes a long time to spread through a group. Coupled with the fact that the vaccination only reduces pneumonia and does not prevent infection, challenges in late finishing can be quite common. What is commonly seen in the barn is a difficult-to-treat cough, coupled with a small percentage of pigs going off feed, followed by an increase in late finishing ulcer development and subsequent mortality. In replacement gilts, a M. hyo infection can not only lead to the amplification of other respiratory illnesses within the sow herd, but it can also drag out into the farrowing house, potentially infecting nursing piglets before they have received vaccinations.

Mycoplasma treatment is difficult. The lack of a cell wall limits the types of treatments available, and drug penetration into the cilia to achieve sufficient therapeutic levels can make treatment even more challenging. The ultimate goal, then, should be to address preventative measures. In low-prevalence herds, single-dose vaccination programs are sufficient to keep pneumonia at bay. However, in unstable herds, an easy protocol to implement involves using a full, two-dose M. hyo vaccination program to ensure that immunity levels will be adequate to market weight. There are a variety of great options available to achieve this, available as either stand-alone or combination products.

The next step is to take a hard look at the sow herd’s M. hyo status. Many producers and their veterinarians have successfully eliminated this infection from their sow herds, which adds a great financial benefit — both to incoming replacement gilts and downstream finisher production — through reduced treatment costs and associated mortality and performance drag. With an average cost of $15–30 per sow, depending on the program (Yeske, 2007), and an average return of around $1.19 per pig marketed, most elimination programs pay for themselves within the first year in average herds (Holst, 2015). With good biosecurity practices, once M. hyo elimination has been established, it can be kept out of a sow herd much more easily than PRRS. Working together with neighborhood producers to collectively eliminate the pathogen will only further improve the long-term success of an elimination program.

In my own experience, Mycoplasma elimination programs are possible in even the most swine-dense regions, and the resulting improvement to the respiratory health of the pigs made the efforts and investment well worth it. If you are planning a herd closure for PRRS or PED cleanup, then consider also making the effort and investment of a concurrent Mycoplasma elimination program. Speak with your veterinarian today about what steps you can take to address Mycoplasma in your herd or pig source.